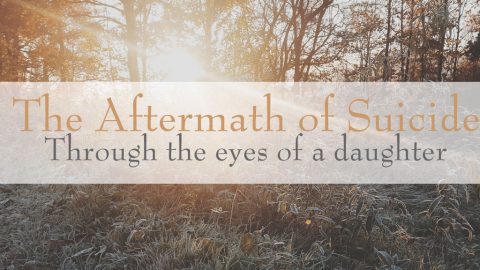 The last time I saw my father, I was boarding a train. I took the Amtrak route from his city to my mother’s city an hour north, every other weekend. This is what custody battles do. Twenty-two years later, the memory of our last moment together is as hazy as day tamped down by the smoke of a distant forest fire, but the feelings remain as hot as the flames. I loved him with my whole 8-year-old heart. When my mother got the call and collapsed in the kitchen, I knew right away what was happening. My father had died, by suicide, and my grandmother was ringing to tell her the news. All she could say between her horrific sobs was, “Daddy’s gone.”

We held a family viewing, his body covered in a hospital sheet stretched across a table in the funeral home. I remember how cold he looked, despite the mortician’s makeup, how his lips stuck together in a permanent seal, and how it was nothing like what he had asked. He wanted to wear black pants, a button up shirt, and a bolo tie. I don’t know if my family was too ashamed or just too overcome with grief to give him a proper funeral. I suspect it was a mix of both. Just four months earlier, my father triumphantly planted a Sago Palm tree in the front yard as a symbol of his recovery from drug addiction. My grandmother took him shopping to buy new clothes for his new life. He was lighter in spirit. Hope hung around him like a halo. But as suddenly as it came, like a film in reverse, he slipped back into his drug-addled ways. Things began to disappear from the house—furniture, movies, electronics. One by one, our home began to look as barren as it felt. He locked himself in his room for the better part of each day.

When you lose a loved one to suicide, clarity received in hindsight weighs heavy on you. Looking back now, it is obvious that my father was struggling with mental illness and self-medicating with drugs. At the time, all anyone could see was someone angry and erratic, someone who had a problem that scorched the earth around us. At the time, we were only just beginning to talk about mental illness as a society.

My father told us he didn’t want to live, that he planned to kill himself. Statistics tell me that eight out of ten people with suicidal ideation make it known, in some form, before their attempt. My age at the time of his warnings prevents me from remembering exactly how my family reacted. There were conversations to assure him that his life was worth living, certainly. Conversations that probably involved my life as a carrot for his. But in his eyes, he had already failed me. In his eyes, he had failed us all, most especially himself. He was living in a prison and the jailor was his shame. Researcher, writer, and speaker, Brené Brown, has said that shame is lethal. I can attest to its insidious power. Grief doesn’t dissipate with time. It simply changes and you change. Then every so often, as a result, you have to experience grief anew, reprocess your relationship to it, and figure out how to once again carry on living with meaning, connection, and joy. These are the things we have to champion for those who can no longer see or feel their beauty.

The first steps toward the restoration of the will to live are removing shame and listening deeply, without judgement. It is one of the greatest gifts you can give anyone in your life, but especially someone who is struggling with the decision of ending their own. According to Brown, shame feeds off of secrecy, silence, and judgement. “Shame cannot survive being spoken. It cannot survive empathy.” I am sympathetic to my father’s struggles. I am navigating my own life with anxiety and Bipolar II Disorder. Though I am benefitted by a society that has opened up more about mental illness since his death, we still have light years to go to ensure that everyone has access to recovery resources that are safe, sound, and affordable. According to the CDC, “The age-adjusted suicide rate in the United States was 24% higher in 2014 than in 1999, and increases were observed for both females and males in all age groups under 75.”

If you or someone you know is struggling with suicidal thoughts, please visit www.afsp.org for a community of hope, understanding, and helpful resources.