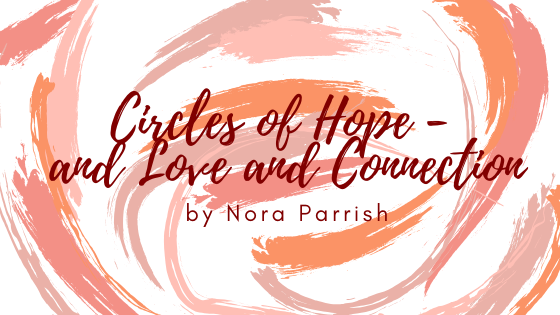 On Tuesday, February 4th, I sat down at a table in Vagabond Coffee for I Still Matter’s Creative Cup workshop. The project was called “Circles of Hope,” and the idea was to weave thread/yarn on a piece of cardboard in a circular pattern from the center outwards.  There were beads provided to decorate the circles further, if one wished.

The previous day had been the seventh anniversary of the untimely death of a very dear friend, and so my mind was on him. I started my circle thinking of him, using colors he liked or that reminded me of him.  (His first initial was D, so I’m just going to refer to him as D going forward.)

D and I never met in person; we initially connected because we were both fans of the fantasy author Katherine Kurtz, and then we started gaming online together.  We became close friends, confiding a great deal in one another; he helped me through several psychiatric inpatient stays, and I served as a sounding board and sympathetic ear for his struggle with epilepsy.

But the project name is Circles of Hope, and so I decided that I should make it both a memorial and a celebration.  During the time I knew D, he reconnected with his younger half-sister, S, and he introduced me to her shortly after they found each other again.  I am, if anything, even closer friends with S now, and she has two beautiful daughters.

S is also creative; she sews and crochets, and she is a photographer.  She has a wonderful way of being blunt and kind at the same time. She is in some ways like an honorary younger sister to me; funnily enough, the age gap between S and me is about the same as the age gap between my oldest brother and me, just the other direction.

And thinking about S and her babies was where inspiration struck: in addition to the circle for D, I could make one for myself, S, and her little girls, and attach them to each other to show the connections we all made with each other, and the love that is still alive even if D is not.

I had originally thought to suspend the circles on ribbons, but I didn’t take into account that S’s “side” is heavier than mine because of the circles for her little girls, so I bought a sheet of blue poster board and attached them to the poster board in the configuration I wanted.  The colors of each circle and the beads attached all have something to do with the person represented.

The circle for D has a lot of blue because his eyes were blue; the red and gold is a reference to the heraldic colors of the royal family in Katherine Kurtz’s Deryni series, and the black is because he is gone.

S’s circle starts with an orange-red because she has red hair (so did D), the blue was to tie into D’s circle, and the green thread and sparkly green bead I chose because she is an amazing gardener.  (Both my grandmothers were as well, and they are despairing together in the afterlife that I, granddaughter to them both, can’t keep a plant alive for anything, LOL.)

I chose to use pink and ecru on both S’s daughter’s circles, but her older daughter loves the color blue, so I used a lot of blue on her circle and chose a silvery-blue pearl for her.  Her younger daughter is as yet too little to express color preferences, but for some reason she strikes me as a “green” child. I chose a pink pearl for her to balance the green a bit.

When I showed the pictures to S, she said she was about to cry from feeling so happy and loved.

And I think hope does (or at least can) include love and connection.  I still miss D; likely I always will.  But the connections we made, he and S and I, and the love, remains.

Nora is a native of Arizona who grew up mostly in the Charleston, SC, area and moved to the First Coast in her twenties.  She has fought mental illness most of her life. She holds a BA in English (cue the song from “Avenue Q” 😉 ) from the College of Charleston, so it should not be a surprise that she enjoys reading and writing.  She also likes to sew, cross-stitch, embroider, and dabbles in other fiber arts, and she is a calligrapher who is active in the Barony of Castlemere, which is the Jacksonville chapter of the Society for Creative Anachronism.  She lives with her beloved golden-brown tabby cat, Carys Elen.